Driving Within the Law

The majority of drivers on Britain’s roads today, are more interested in the quieter side of motoring life, and keeping a clean license than ever before.

This may well be that statistics show that offences caused by motorists vastly outnumber any other form of offence, so that the likelihood is, that they can be picked up almost unawares.

The types of driving offences by legislation are many and varied, but by far out in front (no pun) are speeding offences.

There are others which feature highly, such as undue care and attention, eating, or using a mobile phone whilst driving, and still a surprisingly high number of drink or drug and driving offences, but for obvious reasons, most caught are for speeding.

The offence of speeding is the easiest to monitor by far, with autonomous machines setting speed limits, photographing offenders, and sending out fixed notice penalties, all without human intervention.

It began with the Gatso fixed position speed camera in 1992, which is still in use in some parts today. It uses radar technology to gauge the oncoming vehicle’s speed, and if it over the advised limit, a series of photos are taken of the rear as it crosses white lines painted on the road.

The lines are spaced at a distance equivalent of 5mph, so that if there is a dispute over the radar readout, a simple “back-up” calculation will also show the speed.

The photos are taken of the rear of the vehicle because the camera is enabled by a powerful flash gun, which were it aimed at the front, would certainly startle, and possibly momentarily blind the driver.

This can allow a certain amount of “wriggle room” as the owner of the vehicle will receive the notice of intended prosecution (NIP), which can lead to discrepancies over who was actually behind the wheel at the time of the offence.

Your first duty when you receive a NIP is to return the part of the form that names the driver. If you fail to do this then you will be prosecuted for not doing so and the offence (section 172 of the RTA) carries 6 penalty points and a fine, which is twice as many points as most speeding offences.

If you are caught by camera exceeding the speed limit, your insurance will be checked and if a policy can’t be attributed to you then you will be prosecuted for not having valid insurance, which also carries 6 points. Permitting no insurance is a relatively new offence, introduced to shift the onus of no insurance offences onto the vehicle owner.

In simple terms, if someone drives your car without insurance, it’s your fault, and you will be prosecuted. 6 points is the least you can expect, so don’t lend your car to anyone without checking they have valid car insurance first! 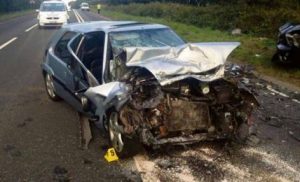 The Truvelo camera allows nothing of the sort. It looks similar on approach, other than the fact that the camera lens is pointing towards you.

Using infra-red flash for the camera it snaps pictures of the approaching vehicle without an apparent flash, but the picture will show in glossy detail just who is behind the wheel.

Standard low level offences generally carry a three point penalty endorsement, but extreme speeds, or totting up points approaching 12 point in total, could well be a court summons and if this is the case, it is far and away better to be represented in court by a solicitor or barrister.